I am pleased to offer a vintage black and white formal photograph of a wedding party from Jamaica, Queens, New York.  This photo features the bride and groom with three (3) attendants and three (3) groomsmen.  The bride is dressed is a tea-length white satin dress with a lace, bonnet-style veil with a train.  The brides attendants also are wearing shorter length dresses and large hats.  Their flowers are beautiful as each of the four women is carrying large bouquets of roses.  The men are all dressed in nice tuxedos with bow ties and carnations on their lapels.  The photo measures 7 1/4″ X 8 3/4″ and is mounted inside a large folder.  The front and inside of the folder are marked “A Portrait by Frederick Weber, Jamaica, New York”.  The folder measures 10 3/4″ X 10 3/4″.

Frederick Johan Weber was born in the town of Garberback, Austria on March 4, 1881.  He came to New York in 1899, settling first in the Rockaways, and then in Manhattan, where he worked as a freelance newspaper photographer.  In 1903, Mr. Weber moved to Jamaica, Queens, and there established himself in the photography business, in partnership with Peter Nybo. A few years later Mr. Weber opened his own studio, which would ultimately change locations three times while remaining in business for over fifty years.  Among Mr. Weber’s clients were the Long Island Railroad (whose legal department employed him as its official photographer), Jamaica High School, several trolley and bus companies, and numerous schools, churches and other institutions throughout Queens, Brooklyn and suburban Long Island.  Taken together, the Weber Collection documents a broad range of life on Long Island in the first half of the 20th century.

Mr. Weber retired from the photography business in 1959.  In 1966 he sold off the bulk of his railroad photographs to historian Ron Zeil, and a large selection of his other work to the Queens Borough Public Library.  Mr. Weber died the following year.  In his lifetime, Mr. Weber’s photographs appeared in numerous publications, including the Long Island Press and Queensborough Magazine, (the official record of the Queens Chamber of Commerce).  In the three decades since the collection was acquired by the Long Island Division, images from the collection have appeared in such books as Lighting the Way: The Centennial History of the Queens Borough Public Library, 1896-1996 by Jeffrey Kroessler, Old Queens, New York, in Early Photographs by Vincent Seyfried and William Asadorian, Caribbean-Americans in New York City by F. Donnie Forde, and Richmond Hill by Carl Ballenas and Nancy Cataldi.

This piece is in great condition showing minimal wear.  Photograph is bright and clear.  Card folder has a smoke odor, but photo could easily be displayed without it.  Displays very well and would make a great addition to any collection. 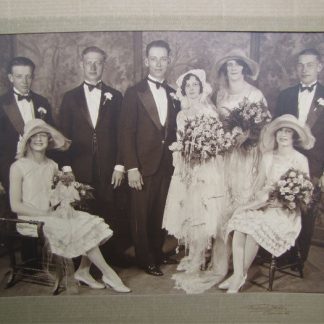