This vintage 1937 photo is from an estate that also included many photos of celebrities. It features Hollywood Actor, Joel McCrea, who was popular in the 1930s and 1940s. McCrea appeared in more than 90 movies during a career spanning 50 years. In this photo, McCrea is in costume and is sitting next to Entertainment Reporter, Peggy Doyle. This appears to be a publicity photo for the 1937 movie, Wells Fargo. As for Doyle, she is in many photos from this same estate. Many of the people she had her photo taken with were actors, actresses, or directors.

Text at bottom of photo says “Copr. 1937 Paramount Pictures Inc. Permission granted for newspaper and magazine reproductions. (Made in U.S.A.)”. Back of photo has handwriting that appears to say “Joel McCrea, who plays Ramsey Mae Kay (sp) western manager for the celebrated express company in Paramount “Wells Fargo” which Frank Lloyd is now directing.”

This glossy black and white photo is in good condition with very light wear on the edges and corners. Photo measures 8″ x 10″. 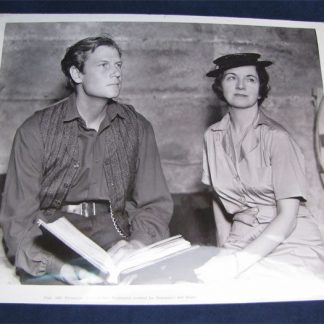