This vintage photo is from an estate that also included many photos of celebrities. It features Hollywood Actress, Anita Louise, who was popular in the 1930s. It looks like this photo may have been staged, and was taken on a movie set. Louise is handing Entertainment Reporter, Peggy Doyle, a cup of tea.

As for Doyle, she is in many photos from this same estate. Many of the people she had her photo taken with were actors, actresses, or directors. This glossy black and white photo is in good condition with very light wear on the edges and corners. Back is stamped “Photo by Ed Stone, Warner Bros. Studio”. “Anita Louise” is handwritten on the back. Photo measures 8″ x 10″. 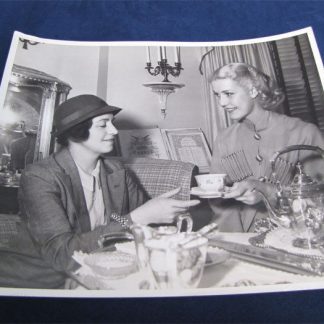