According to the National Museum of Play:
“One of the most popular children’s games of the late 19th century was called “Peter Coddles and his trip to New York,” or some variation of that title. The games true origins have been lost but it is thought that it was first developed by McLoughlin Brothers in New York, though nearly every competitor produced one or more versions.

Some, such as this version, bore completely different titles but followed the same method for play. It is a very simple word game best played with a large group of children, so it lent itself to social gatherings, parties, or holiday functions.

The game consists of cards, usually small printed strips, with word groups printed, usually nouns. A leader reads the ‘story’ supplied with the game and when he/she encounters a blank, the first player to the left supplies the words from the card drawn.

The play advances around the table, with nonsensical humor increasing with each blank in the story. Versions range from simple to deluxe–with quite complicated printed stories supplied. The game relates to other word games of its time such as Anagrams and to contemporary word games such as Boggle and Mad Libs.”

Very good overall condition for c. 131 years old! The original box shows some moderate edge wear and slight loss to the original label. However, the lithograph label remains vibrant and displays very well. The booklet show some moderate creasing and edge wear, but remains intact. Paper slips are numerous in count and some have handwritten alternatives. Killer Piece! 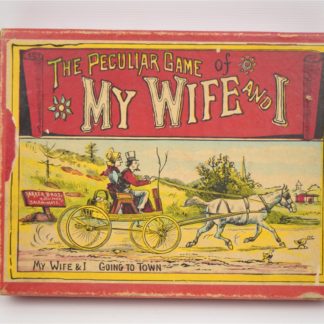