Errolle was the daughter of opera star, Ralph Errolle Smith. During her career, she performed at Carnagie Hall and the Met. She went by Martha or Marthe and died under suspicious circumstances in 2002 in Sarasota, Florida.

This is a glamorous head shot photo of Errolle. It was taken by Bruno Hollywood. Photo is in good condition with some age discoloration for a great vintage look. Glossy photo measures 8″ x 10″.

Errolle died on April, 19, 2002 at age 86. When officers showed up at her home, they say she had severe bruising on her face and head. A 38 year-old man who had lived with Errolle for ten years said she fell off the toilet. Sarasota police called the death suspicious. 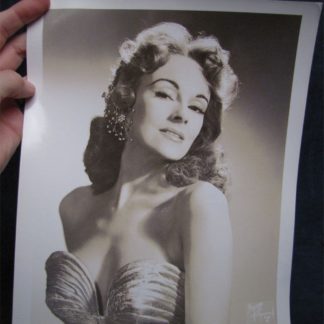