Considered to be one of the “holy grails” of robot collecting, this is the ultra-scarce Modern Toys/Masudaya tin Giant Sonic Robot (aka “Train” robot), manufactured in in the late 1950s and very early 1960s.

It is believed to be the last member of the so-called “Gang of Five,” a set of skirted battery-op robots that included Sonic, along with Radicon, Target, Non-Stop and

These robots command the top spots in the pantheon of robot collecting, and prices as high as $42,500 have been paid for them individually at auctions.

The robot stands an impressive 15 inches high, and is complete and all-original. There are a few light scratches. The battery compartment is clean.  The colors are vibrant. All of the lenses are original, as well as the wheels.

I put in three size D batteries and the toy powered right up and moved around and made the Train noise.

The box is a high-Quality Reproduction that costs about $300 itself. We purchased the box to help add a little extra display value for the robot. 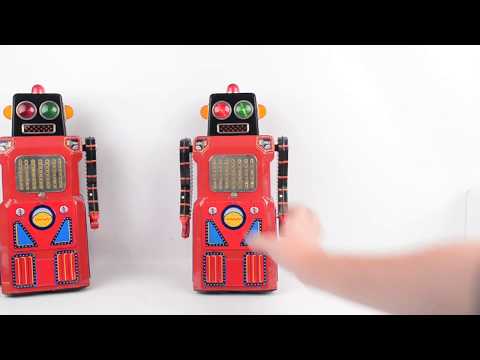 Video will open in a new window
Using the eBay App? Paste link into a browser window:

Excellent overall condition. A few scratches across the body but that’s really about it. Tested and working well with movement, lights and train sound.