This piece is absolutely stunning, and the craftsmanship is second to none!  The piece is engraved by the maker on the blade: “T.A. Lyon 50, Leith St. Edinburgh”.

The Hilt of the dirk, as well as the small fork & knife, appear to be intricately carved wood (likely bog or ebony) and are decorated with sterling nails.  The hilts are also adorned with beautiful sterling silver thistle pommels with large set Cairngorm stones.

The blade measures a little bit over 12″ in length, and has a peculiar double-edged tip and jimping down 2/3rds of the back edge.

The scabbard was crafted from beautiful dark leather and is lavishly decorated with bands of embossed thistle sterling, and a battle memoriam near the hilt with the Sphinx marked “Egypt 92”.  The piece is also engraved “LT. Charles Monro 2nd Batt.”  The backside sterling bands have the Edinburgh Sterling Hallmarks.

The Dirk had belonged to a Charles Gordon Monro, who was born in 1872 and was educated in Harrow.  He entered the 2nd Battalion of the Gordon Highlanders in 1892 as a second lieutenant.  In 1896 he was promoted to Lieutenant, and he served in India and Africa.

During the epic battle at Elandslaagte of the Second Boer War (Oct. 21st, 1899), Lt. Monro and 3 other officers of the Highlanders met their fate in a mix of gunfire, boulders, artillery, and hand-to-hand combat.

This antique Dirk is Legendary!

Unique and wonderful display piece for any collection!

This antique dirk is in very good condition for its age (well over 100 years old!!). The sterling shows very little tarnish and some mild scratching. The leather scabbard shows some loose spots near the inserts for the small knife and fork, however it remains sturdy. The blade still has a light sharpness, and shows wear from use (possibly battle worn!) 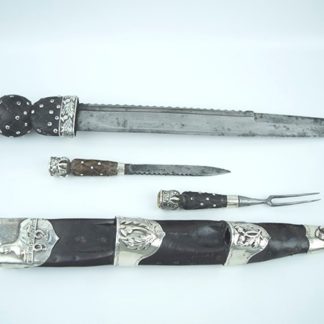