Presenting a rare antique Mule Entering Barn cast iron Mechanical Bank. Made by J&E Stevens circa 1880. The bank is all original and in working order. The base measures 8 1/2″ x 3 3/8″ inches. The barn measures 5 1/4″ inches high. Please note that this bank was professionally repaired and restored by Russ Harrinton. The front part of the base underneath the mule’s belly was cracked courtesy of UPS. Russ rewelded the broken piece and repainted about 75 percent of the base. I believe he did an excellent job. The rest of the paint is all original.

The following is written by F.H. Griffith for the October, 1972 issue of Hobbies Magazine concerning the Mule Entering Barn Bank:

“This is the Mule Entering Barn, a bank that well fits the rural theme. Other mechanicals comprising the group are Boys Stealing Watermelons, Hen and Chick, Weeden’s Plantation Darky Savings Bank, Uncle Remus, Bad Accident, and perhaps a border-line bank or two such as I Always Did ’Spise A Mule. The Mule Entering Barn was patented August 3, 1880 by Edward L. Morris of Boston, Mass., and this patent date is used on the base of the bank itself. We mention this with respect to the fact Mr. Morris patented the bank previous to this date, specifically January 6, 1880. In this patent, however, unlike the bank as manufactured, the figure of the mule pivoted at the shoulder on the front legs. That is to say the body of the mule moved up and over on stationary front legs, the front legs being fastened to the base. The bank as produced is just like the patent drawings and text of the August 3rd date with one very interesting and important exception. Mr. Morris made no provision in his patent text or drawings for the dog that runs out of the barn. Whether he or the J. &. E. Stevens Company who made the bank added this most attractive additional action is not known, and it doesn’t really matter, as in either case it is a very desirable feature. Not mentioned in the text of either patent is the movement of the mule’s offset tail. This was a practical additional action since had it been made stationary it well could have interfered with the coin when thrown from the hind legs into the barn. The paint is exceptionally nice and colors are as follows: The roof is medium tan brown with a red stripe along the length of the peak. The under-section of each end of the roof is red. The sides, back and parts of the front of the barn are an off shade of green. The inside entrance way is yellow. In the bottom of the entrance way is representation of green grass into which the mule’s head more or less fits when positioned therein. Red outlines the windows, the sides, and other parts of the building. Two small roof sections are on either side of the mule’s front legs and these are the same color as the main roof and outlined in red. The base is a darker red-brown striped in red. The mule is dark brown with black mane, tail, mouth and rear hoofs. He has white eyes. The dog is white spotted in black and definition of his eyes is also black. That completes the coloring on a very attractive bank. To operate, the mule is pulled down into position as shown in the picture. Also, as shown, a coin is placed between his rear legs. Then a small lever on the base is pressed forward. The mule rapidly pivots over and he ends up standing on his head in the barn. The coin is thrown inside the building as the mule’s tail moves up and to the side. At the same time a dog springs forward from an entrance way in the lower front of the barn.” 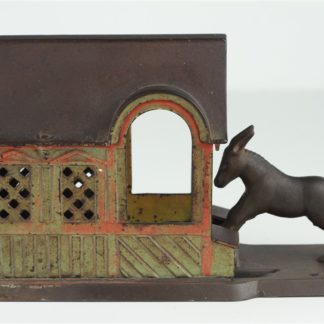