Here we have a c.1861 Tomas Griswold & Co. New Orleans 18″ Bowie Knife!  Griswold was known as one of the finest sword makers in the South, and provided the Confederate army with superior edge weapons (as the Union Army had superior firepower).

The Blade is stunningly huge on the piece, and was sure to strike fear in the hear of any that were unfortunate enough to be on the receiving end of it.  The blade itself measures about 13-1/4″ Long x 1-7/8″ Wide!  “Thomas, Griswold & Co./New Orleans” marked on the ricasso, and on the reverse side is the Louisiana Pelican underneath 7 stars (the original 7 states of the Confederacy, early 1861).

One side of the blade also has an etching of cowboys lassoing bulls.

The hand is a thick straight cylinder of stag horn, capped with a shallow dome pommel.

The knife comes with its original dark leather wrapped sheath.

The fact that this knife does not have the “D-Guard” design suggests that it perhaps was not made for military, but an example of a Confederate/Louisiana civilian patriot’s knife.

The blade has some dark patina and oxidation natural from age, but still remains very lustrous from being over 150 years old. The Griswold marking is clear and defined, as is the Louisiana Pelican.The blade has some very small pits, and is overall dull. Point is still sharp. Leather sheath shows average wear for its age, but remains sturdy and intact. 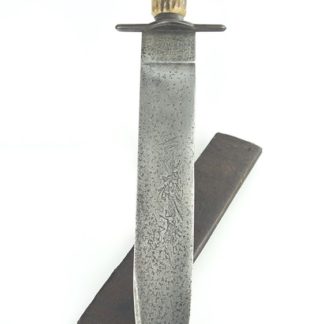