Fabulous vintage set of 22 souvenir photos from Washington state. These photos are very nice, they look like litho postcards, but are all connected. They are printed on each side and fold up accordion style. These photos have the same “look” as linen postcards.

Set is in good condition and shows very little wear, some discoloration on flap and photo closest to it, 1 photo partially torn from others (torn at seam in between photos),  small light pink colored stains on the corner of a few photos.

Overall, this is a fantastic set, especially for anyone who lives in Washington state… it is very fun to see what popular Washington locations used to look like! 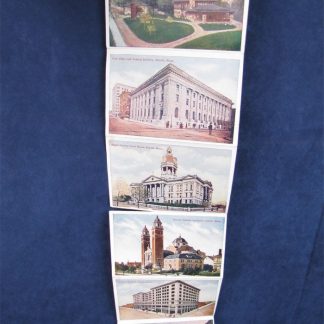