Nice vintage lobby card from the 1969 movie, “The Good Guys and the Bad Guys” starring Robert Mitchum and George Kennedy. In the photo, both men are carrying guns and they appear to be on the lookout for someone.

Photo is in good condition with very little discoloration, light wear to the sides, bottom right corner is torn off.Measures 13 1/4″ x 10 7/8″. Back side of photo shows some discoloration and smudging. 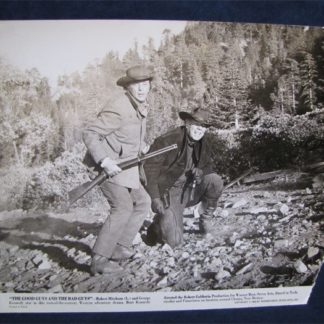