1957 Photos Boy Outside In Shorts Holding A Chicken

I am pleased to offer a set of two interesting photos dated August of 1957.  Both measure 5″ X 3 1/2″ and have scalloped edges.  One of the images features a young boy in shorts pointing an Indian spear at the camera.  The second image shows the boy sitting on a stone bench holding a chicken.  It’s hard to tell at first that it is a chicken, but it is.  The photos were removed from an album and the descriptions on the backs are partially lost, but the boy’s last name is Davis and he is 9 years old.  The descriptions state that the spear is from an Indian Reservation, and I believe the chicken’s name is listed as “Ginger”.

Both piece in good condition with clear images.  The backs show wear as described but both pieces display well. 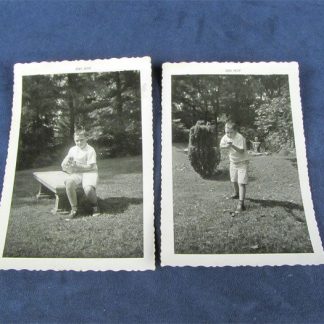 You're viewing: 1957 Photos Boy Outside In Shorts Holding A Chicken $5.95
Add to cart